Academic life at Penn is unparalleled, with 100 countries and every U.S. state. Consistently ranked among the top 10 universities in the country, Penn enrolls 10,000 undergraduate students and welcomes an additional 10,000-plus students to our world-renowned graduate and professional schools.

Penn’s award-winning educators and scholars encourage students to pursue inquiry and discovery, follow their passions, and address the world’s most challenging problems through an interdisciplinary approach.

Penn is committed to creating a community of students, scholars, and staff that reflects the diversity of the world we live in. Toward this end, the University established its Action Plan for Faculty Diversity and Excellence in 2011, which has led to, in 2019, a 46 percent increase in underrepresented faculty and a 22 percent increase in female faculty.

Nearly half of Penn’s undergraduates self-identify as students of color, more than half are women, 13 percent are among the first in their families to attend college, and 13 percent are international. The spectrum of valuable perspectives and ensuing dialogue are key contributors to educational excellence and an inclusive, dynamic campus environment.

Solving today’s complex problems requires knowledge that crosses traditional boundaries. True to our roots, Penn encourages both intellectual and practical pursuits, and has attracted some of the most eminent interdisciplinary scholars and teachers working today through our Penn Integrates Knowledge program.

At Penn, civic engagement is an integral part of campus life. Situated near the heart of Philadelphia, the first World Heritage City in the U.S., Penn is a national leader in academically based community service through our Netter Center for Community Partnerships. Penn continues to deepen its longstanding commitment to the local community in numerous ways, with 13,000 University students, faculty, and staff participating in more than 300 volunteer and community service projects each year.

Thank you for visiting our home on the web. I invite you to explore the people and programs of Penn.

From West Philadelphia to the comfort of your own home, we invite you to explore Penn through a virtual tour of our historic campus. Get a glimpse inside our state-of-the-art classrooms, hear from current students and faculty, and catch live performances by members of our community as you stroll down Locust Walk. 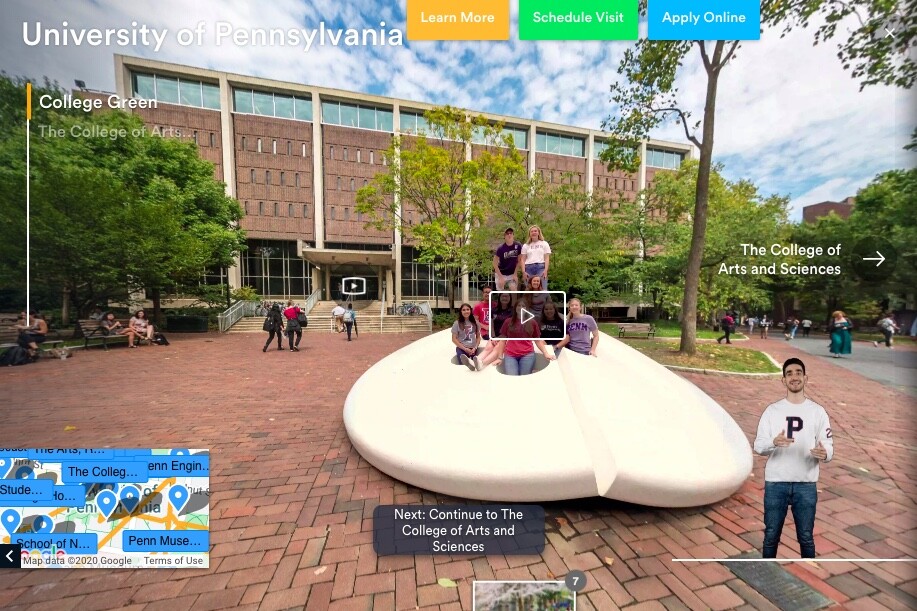